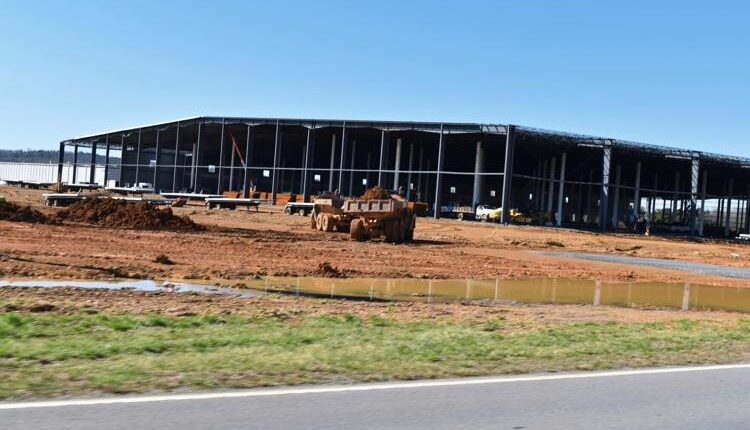 Gordon County has been a hotbed of industrial growth over the past several years, and that hasn’t shown any sign of slowing down.

Especially along the South Highway 41 corridor between Calhoun and Adairsville, the addition of the Union Grove/South Calhoun Bypass Interstate 75 exit continues to overflow its dividends.

“I came to Gordon County in 1986. Even then, we anticipated our location on I-75 between Chattanooga and Atlanta would drive economic growth,” Gordon County Administrator Jim Ledbetter said. “Now, we suddenly have about 13 million square feet of speculative industrial/warehouse space planned for Calhoun and Gordon County.”

Within the county’s borders, there are currently millions of square feet of approved zoning requests for industrial facilities, and the landscape of many parts the area around the interstate has already changed drastically over the past five plus years.

“It has really been surreal for those of us who experienced the Great Recession,” Calhoun City Administrator Paul Worley said. “We had numerous years of little to no growth at all. Now we are seeing very strong growth in industrial, commercial, and residential.”

Both city and county governments have had to work hard keeping up with the sudden rapid nature of growth within their municipalities, including traffic, utilities, public and emergency services, education services, as well as controlling growth to balance quality of life and economic development.

Some of the industrial growth in the area includes expansion of companies already residing in Gordon County, like the move of CFL Flooring from Lovers Lane Road to Highway 41 South in the area of Trimble Hollow Road. Also expanding over the last year was Nourison Industries at the corner of Highway 41 and the new South Calhoun Bypass.

Several other massive speculative warehousing facility projects, facilitated by OWR Industries LLC join CFL right along the Bartow County Line. Grading and city utility work for those facilities is underway now. Just a year ago, most of the property in the Trimble Hollow Road area was still empty pasture.

Some of the farmland across the highway from Trimble Hollow has already been purchased as well, making way for even more possible industrial growth as well.

It appears the definitive area between north Adairsville and south Calhoun will soon be a blur as the industrial areas eventually meet at the county line.

Most recently the growth has been creeping up the Union Grove Road area towards Sonoraville with land purchases and rezonings approved all the way past the new Highway 53 intersection.

One of the biggest ongoing concerns the local industrial boom brings to government officials is trying to make sure infrastructure can keep up with growth.

“The rapid growth presents numerous challenges. Increased traffic on country roads is an immediate concern,” Ledbetter said. “I have seen studies that predict up to 20,000 more vehicles on our roads each day if all of the new development gets built. The size of these massive buildings challenges our public safety capabilities.”

Both city and county governments as well as school systems have expressed guarded optimism at times throughout the past year at times, but the consensus seems to be that plans are in place for all local bodies to handle the coming wave.

Calhoun Utilities has to plan to ensure our infrastructure is also keeping up with the growth,” Worley said. “We definitely have our challenges ahead of us, but I do think we are ready to face those challenges.”

With Gordon County as a whole already experiencing a significant affordable housing shortage, the jobs brought in by the forthcoming industrial facilities not yet open will only add to the problem — an issue already on the minds of both city and county officials, including the school systems.

The balance of growth and quality of life made for some lengthy and sometimes controversial residential planning processes throughout the past year, including a 37-acre parcel annexed by the city and rezoned last March for around 125 homes in its first phase.

Though housing is an immediate need, added traffic onto county-run Dews Pond Road has been a concern expressed by some nearby residents.

A planned county 131-acre development on Fairmount Highway saw its zoning application withdrawn in November following concerns by officials about emergency vehicle access as well as possible strain on nearby Sonoraville schools.

If eventually built , the project would be the largest such development outside the Calhoun city limits in Gordon County with a proposed 525 multi-priced single-family houses and townhomes.

We want to be very careful as we set a precedence for the future,” Commissioner Bud Owens told the applicants during a November hearing before the Gordon County Board of Commissioners.

Even with inflation, a labor shortage, and building materials rising in price and experiencing rolling shortages, the desire by developers to build more affordable housing doesn’t seem to be slowing down any time soon in an attempt to catch up with Gordon County’s industrial boom.

“We need more affordable housing for workers to staff the new industry,” Ledbetter said. “I have heard estimates of over 3,000 new homes coming to Calhoun and the County which leads to the need for more schools.”