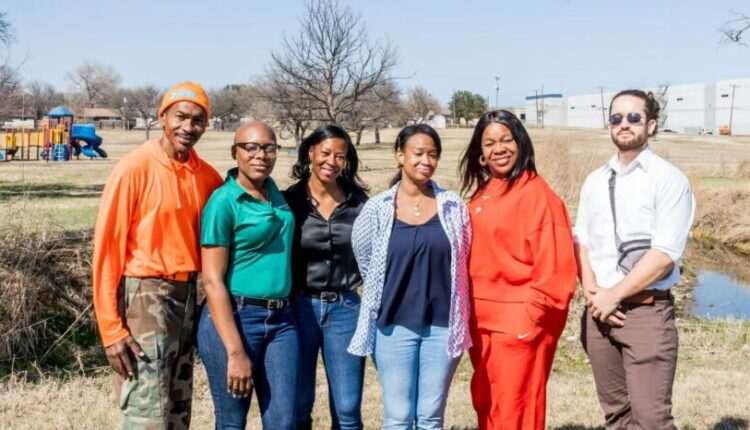 The city of Fort Worth has zoned an area near Echo Heights as “industrial growth center.”

When Letitia Wilbourn gives a “toxic tour” of her neighborhood in southeast Fort Worth, she starts in her own backyard. She points to a small grass patch separating her property from a trucking facility on Parker Henderson Road, where echoing rumbles keep her awake and prevent her from sleeping in her master bedroom.

Kids from across Echo Heights, where Wilbourn bought a house in 1985, used to spend time in the backyard while Wilbourn – better known as “Tee” to friends and family – cooked hot dogs on the grill. When the trucking facilities arrived, the fumes and noise made that impossible, she said.

“I recently ended up calling the police because I thought someone was trying to break into my home,” Wilbourn, a retired Tarrant County sheriff’s deputy, said. “The trucking company, whatever they did, it gave off a sonic boom, and it actually knocked the stuff off my walls. I thought somebody was breaking into the back door, and it was just the noise behind my home.”

Just down the road from her home, Wilbourn takes visitors to Prairie Dog Park, where industrial facilities and natural gas drilling surround the green space in the majority-Black and Hispanic neighborhood, located just west of Lake Arlington and Loop 820.

In the late 1970s, Wilbourn said, city crews moved prairie dogs from the park so they would not be endangered by commercial development. Archival news footage from the time shows Humane Society volunteers and parks staff attempting to round the animals up and transfer them to West Texas.

“Everybody used to come from around the city to come to the park to play with the prairie dogs,” Wilbourn said. “It’s so chilling that they took the animals to safety and left the kids to suffer.”

Across the street from Prairie Dog Park, Fort Worth created an “industrial growth center” that includes several trucking facilities, garbage collection sites and shipping centers near W.M. Green Elementary School and a city animal shelter. Wilbourn and other activists have counted at least 186 light industrial businesses in Echo Heights, which can include warehouses, transportation centers, outside storage and some assembly plants, according to a city definition.

Over the years, as more industrial facilities arrived in Echo Heights, Wilbourn and several neighbors said they noticed an uptick in illnesses, especially cancer, among their neighbors. A young child diagnosed with leukemia. Multiple miscarriages that stopped once the woman moved out of the neighborhood. Hair loss that doctors couldn’t explain. Residents, including Wilbourn, call it a legal way for companies “to become serial killers.”

“So many people have died because of what (city leaders) have allowed to happen to the community,” Wilbourn said. “They should have known better.”

Wilbourn is fed up with what she views as a lack of action from Fort Worth officials, and she’s not the only one. With the help of Fort Worth’s NAACP chapter, community members began meeting last February to plan their opposition to a permit application seeking to build a crane storage facility in Echo Heights.

The application was unanimously denied by City Council members in March 2021 after neighbors expressed concerns over the impact of air pollution on community health. Since then, residents restarted their city-recognized neighborhood association to receive official updates from the city, a suggestion that District 5 council member Gyna Bivens made during the March council vote. Bivens currently represents Echo Heights on council.

Activists also formed a separate group, known as the Echo Heights Environmental Coalition, to research the impact of industrial zoning on their community. Wilbourn serves as secretary, and Mar’Tayshia James – who ran for the District 5 City Council seat against Bivens last year – is the group’s president.

“Rather than waiting for someone to speak up for us, we had to do it ourselves,” James said. “Neighbors are having issues with being able to reproduce, being able to live their lives in their neighborhoods because of where their homes are. These are stories that we are ignoring, and that aren’t being brought to the forefront. These stories just aren’t addressed.”

The coalition has support from the NAACP, Legal Aid of Northwest Texas and TCU professor Erik Kojola, who is assisting with research on zoning and permitting. Activists are still determining the best path forward, but researchers are looking into grant funding for low-cost air monitors that could provide data on the amount of pollution in Echo Heights, Kojola said.

City code compliance officers investigate air-related complaints, but do not conduct air quality monitoring. The Texas Commission on Environmental Quality, which regulates the state’s air quality and pollution, maintains six monitors in Fort Worth, the closest of which is about four miles from Echo Heights.

In a statement, city spokesperson Michelle Gutt said that future land use maps in Echo Heights have planned an industrial growth center since 2000. The city reviews its comprehensive plan annually, she added.

“The Loop 820 East/Lake Arlington Industrial Growth Center is located immediately adjacent to Highways 287 and East Loop 820, and it was designated to take advantage of the easy access to these highways and to Interstate 20, as well as the significant amount of vacant land in that area that could accommodate businesses and help generate jobs for the surrounding neighborhoods,” Gutt wrote.

Raisch Tomlanovich, a paralegal for Legal Aid of Northwest Texas who is tracking new industrial permit applications for the coalition, said the activists are ultimately seeking to regain control over their land. Changing the way Fort Worth approaches its plans for further expansion of industry is the biggest challenge ahead, he added.

“Historically in this country, especially in Black communities, property rights are consistently violated,” Tomlanovich said. “In order to deindustrialize or even have some method of control over their own area, they have to exercise way more activism, time and energy in order to get the same things that other neighborhoods get very easily.”

The city’s official land use plans for southeast Fort Worth, last updated in 2022, include protecting the environmental quality of Lake Arlington and preserving land for “green infrastructure” projects, especially for stormwater retention and new trails.

At the same time, Fort Worth’s comprehensive plan currently projects further industrialization for Echo Heights and the area directly east of it. City staff are instructed to “promote a balance of residential, commercial and industrial uses” in the southeast while also promoting industrial development within the Loop 820 industrial growth center.

The city defines a growth center as having a high concentration of employees – 10,000-plus per square mile – and notes that “residential uses are generally discouraged within” growth centers, though the definition does not rule out nearby neighborhoods.

Bivens, who some Echo Heights residents criticized for not being responsive to their concerns, said that the 2021 council vote against an industrial facility showed she was on their side. Re-establishing their neighborhood association should help resolve complaints that residents are not being notified of new permit requests, she said.

She added that industrial activity is nothing new in Echo Heights and more data was needed to see if the area had become significantly more industrial over time. Bivens suspects that the neighborhood will be zoned into a new council district – either District 8 or the new District 11 – after the redistricting process is completed this year.

“There’s never too late for an awakening,” Bivens said. “We’ve taught them how to plug into the system, how to get information from the city. They will probably shift to another council district where they have greater affinity, because at their location, people who live south of there tend to have more interactions with people in District 8 or the new district.”

While residents say that air quality and health issues have long been on their minds, Fort Worth’s code compliance department counted three air-related complaints over the past five years, all of them filed in 2021.

Two complaints, received in March and August of last year, were tied to a facility that was allegedly idling large equipment near residences, Gutt said.

The third complaint, made in November, was related to dust being generated from road work. Gutt said any future complaints could be made through Fort Worth’s call center or the Texas Commission on Environmental Quality.

Wilbourn said she is in frequent contact with code compliance officers and often leaves those conversations frustrated when no citations are issued. She recalled an incident where residents smelled tires being burnt during evening hours at a nearby garbage center.

“Their comment was, ‘I’m not going to give any citations because it depends on how the wind is blowing,’” Wilbourn said. “You remember the song from the ‘90s that says, ‘911 is a joke?’ Well, for us, code enforcement is a joke.”

Hope for the future of Echo Heights

There are potential improvements on the horizon for Echo Heights. The city’s transportation department recently announced plans for street repairs in the neighborhood and the nearby Stop Six area. One of those streets, Chickasaw Avenue, was included on Wilbourn’s “toxic tour” as an example of how massive trucks have torn up roads.

In addition, a new report detailing plans for Fort Worth’s Open Space Preservation program identified the western shore of Lake Arlington and properties near Prairie Dog Park as opportunities to protect trees “in an area where that resource is being depleted by development.”

“Conservation of these smaller patches as open space will allow for the surrounding neighborhoods to continue to enjoy this natural resource that is iconic to the community,” the city report reads. “Open space conservation in these areas will provide a natural buffer for the residents of these neighborhoods while providing flood control around the intermittent creek that flows through it.”

More change is possible now that the neighborhood is organized and forming alliances with other activist groups, said Gena Byrd, the environmental climate justice program coordinator for the NAACP’s Fort Worth chapter.

To be effective, it’s crucial for the coalition and their partners to start with a strong base of information – including historical research – and then consider maintaining their own air quality monitors so they have new sources to draw from when advocating for Echo Heights, Byrd said. The coalition will also continue fighting permit applications that would lead to new industrial activity in the area.

“I call it ‘the quadrant of death’ because they have a lot of issues, and it cannot be narrowed down to one thing,” Byrd said. “We have to stop and figure out which one we can actually deal with first, and the health one is not feasible yet because of the research we need. It comes down now to the air pollutants.”

James, the coalition’s president, has watched Echo Heights transform since she was growing up in the 1990s. The community still feels like a family, she said, but the agricultural land that surrounded the neighborhood is nearly gone. Local businesses and grocery stores are necessary to sustain Echo Heights – not more industrial facilities, James said.

“I’m hoping that people see that we are calling our representatives out and that they shouldn’t be afraid to do the same,” James said. “If they are experiencing this, Echo Heights can be the start of something

The Nasdaq Fell, Bed Bath & Beyond Gained—and What Else Happened in the Stock Market Today