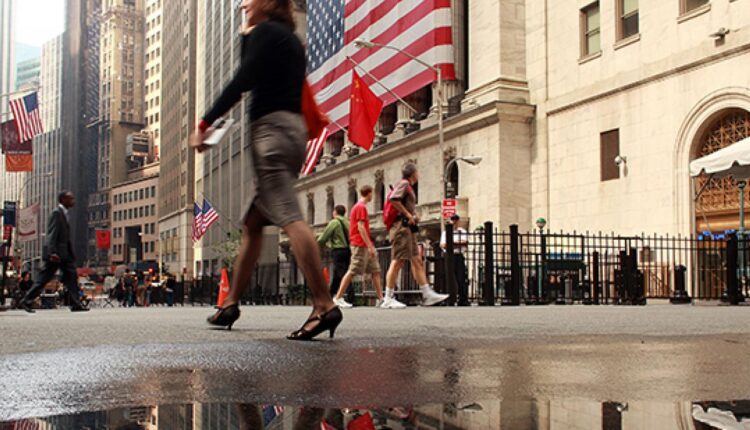 Share
The S&P 500 Index is up more than 8% over the past two weeks, recouping all of its losses since the Russian invasion on Feb. 24. The Nasdaq is up almost 11%.

Investors are scrambling for safety as risks mount, from the war in Ukraine to rising interest rates and a global recession. They have found it in the U.S. stock market — particularly the biggest American companies.

The S&P 500 Index is up more than 8% over the past two weeks, recouping all of its losses since the Russian invasion on Feb. 24. Meanwhile, the tech-heavy Nasdaq 100 has gained almost 11% over the same span. With earnings looking strong and corporate outlooks improving, there are reasons to think these gains can hold despite the myriad risks facing global equities.

“It bothers people because they feel like the market is heartless,” Nancy Tengler, chief executive and chief investment officer at Laffer Tengler Investments, said in a phone interview. “And that’s correct.”

The fighting set off a spike in commodity prices, stoking inflation that already was at a four-decade high. Meanwhile, sanctions on Moscow threaten to weigh on global economic growth. Recession risks in the U.S. are also piling up, with parts of the Treasury yield curve inverting as the Federal Reserve embarks on a new tightening cycle.

Perhaps most puzzling is the fact that the world’s biggest stock markets haven’t collapsed. The STOXX Europe 600 Index is basically flat since Russia invaded Ukraine. The MSCI AC Asia Pacific Index is down a little more than 3% in that span and the Nasdaq Golden Dragon China Index has lost around 7.5%, largely because of growth fears and the risk of Chinese firms being kicked off U.S. exchanges.

For now, American stocks appear to be the best option for global investors, particularly compared with bonds. The return on global government debt weighted by world GDP is on course for its worst year since 1949, according to Bank of America.

The view is we should just rotate to sectors which are more favorable to the situation, because there’s really not much of an alternative to equities,” said Ilya Feygin, managing director and senior strategist at WallachBeth Capital.

Large-cap stocks in the U.S. offer more safety and value than small- and mid-cap shares since they tend to generate reliable income for investors, especially companies that can maintain dividend payouts. In addition, the U.S. equity market’s swoon to start the year may have largely priced in a spike in oil prices and softening of economic growth, meaning they aren’t as expensive anymore, according to Tengler.

“U.S. large-cap stocks are havens because they’re reliable growers and don’t have a ton of debt,” Tengler said. “This is an opportunity to get higher-quality companies on sale.”

Another leg of support for U.S. stocks has been improving expectations for first quarter S&P 500 earnings-per-share growth, which have increased for three straight weeks, according to Bloomberg Intelligence.

Investors also are finding comfort in American corporations thanks to the huge piles of cash on their balance sheets amassed during the pandemic. As a result, U.S. companies are stepping up share buybacks to records. S&P 500 firms bought back $882 billion in stock last year, up 9.3% from the prior record set in 2018, according to S&P Dow Jones Indices.

In addition, some of the biggest technology names like Apple Inc., Google parent Alphabet Inc. and Microsoft Corp. remain down the year, providing opportunities to buy shares that had been at all-time highs not too long ago.

“Big Tech has shown resilience, especially the FAANG names,” Eric Beiley, executive managing director of wealth management at Steward Partners Global Advisory, said in an interview. “Investors saw some of those stocks down at least 20% as a buying opportunity. Cyber stocks have also been a bright spot, while semis are attractive since they’re the backbone of the digital world.”

All that being said, there are still risks because historical recession indicators have been flashing warning signs to investors but are sending mixed messages. The gap between yields on two-year and 10-year Treasuries has narrowed, while the spread between 10-year and three-month Treasuries is actually steepening. Both measures have predicted recessions in the past.

From a technical perspective, the S&P 500 is at a key inflection point now that it has crossed back above its 200-day moving average. If it can stay over that level and move beyond February’s highs around 4,590 (it’s currently about 4,543) it could signal that the market is on an upward trajectory. If it fails, however, it will likely be a sign that a counter-trend rally has been unfolding.

“History shows that markets initially see a significant drop on concerns about a war. Then often times a recovery happens once the act has occurred,” Beiley said. “What could change my mind? Something worse happening. We don’t know how things will end between Russia and Ukraine. That’s a big concern. Does it escalate or get worse?”